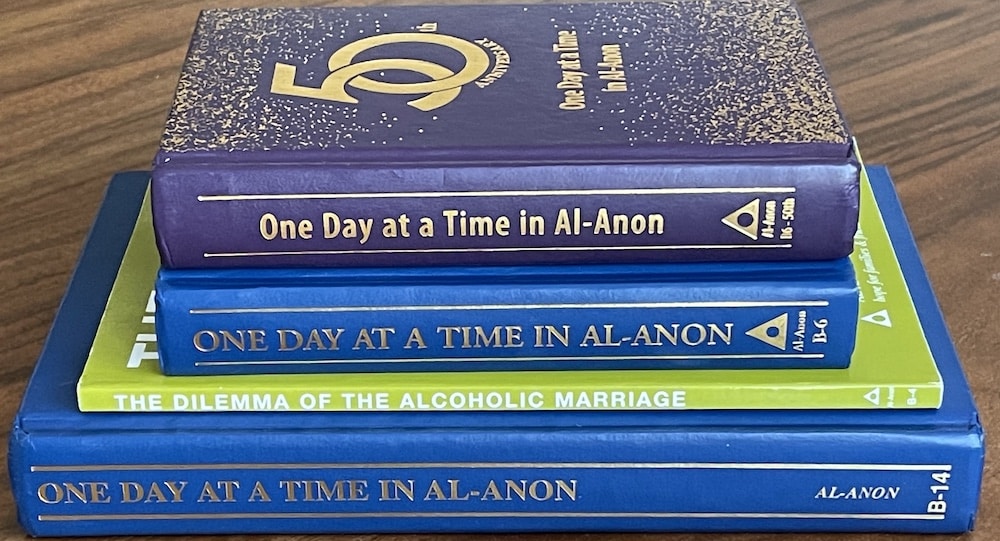 Bookmarks – May – Moving Forward While Honoring Our Past

Did you know that one person wrote One Day at a Time in Al-Anon (B-6)?

I was amazed when Lori F., our Delegate to the World Service Conference, told me that.

Alice B. was 72 years old when she wrote the book we often call ODAT. After receiving Conference approval in 1966, it was first published in 1968. It contains 366 (including a leap year Feb. 29) daily reflections on everything from Acceptance to Wisdom, and remains one of the most popular pieces of literatures in the Al-Anon pantheon. Given all the wisdom the little blue book holds, Alice was clearly inspired by the Higher Power.

In fact, Lois W. wrote this inscription in the 1972 edition of ODAT:

“To Alice, the transcriber (for I know a Power greater than ourselves is the author) of this book.

With all gratitude and love, Lois.”

Because the book was Al-Anon’s first reader and part of our history, the Conference decided in 1978 to protect it from being substantially revised, apart from correcting such things as typos and punctuation. Any major changes would require majority approval from the Conference, Lori said.

ODAT has remained unchanged. But over the years and more in recent times, the WSO Literature Committee has gotten requests that certain pages be changed since the book is dated and/or has non-inclusive language.

Last month the Conference agreed to create a new introduction, offering a historical perspective. The introduction hasn’t been written yet, but the fact that the Conference is willing to include it shows a recognition that perhaps some members of Al-Anon have trouble relating to parts of ODAT.

In the same vein, the Conference also agreed to add a new preface to The Dilemma of the Alcoholic Marriage (B-4), which was first published in 1971.

Lori explained that similar requests for changes to The Dilemma focused on parts of the book that appear as advice giving, and notions such as the husband as head of household, and that the Al-Anon member is a woman.

“The new introduction and preface could allow the books to be unchanged but could provide a historical perspective on the books, and at the same time emphasize the timeless nature of Al-Anon’s spiritual principles that the books so wonderfully exemplify,” she said.

When will the introduction and preface be included in these two books? First, they both have to be written by the WSO Literature Committee and staff. That will take time. Next, they will have to be approved by the WSO Executive Committee.

Then the existing supplies of ODAT and The Dilemma of the Alcoholic Marriage will have to drop low enough to warrant new printings. Meanwhile, book sales are down due to the lack of in-person meetings caused by the pandemic. So it’s anyone’s guess when we will see the new introduction and preface opening up for the traditional texts of the existing books.

However, other changes are coming:

Meanwhile, you can always browse through the complete literature color catalog at https://al-anon.org/pdf/S15.pdf. The catalog and the order form are available for download.